UIDAI Aadhaar ALERT: Make corrections in your name through Aadhaar self-service update portal – THIS document is a must!

Aadhaar Self Service Update Portal Name Correction: Aadhaar is a verifiable 12-digit identification number issued by the Unique Identification Authority of India (UIDAI) to the resident of India for free of cost. At present, the Aadhaar has become one of the most important documents for one’s identity. There are several services that Aadhaar provides to its users online. Now, one will be able to update one’s name in one’s Aadhaar through the Aadhaar self-service update portal.

Recently, the Aadhaar has tweeted from its official Twitter handle and stated that now one will be able to update one’s name in the Aadhaar. The tweet said, “Now you can update your name in your Aadhaar yourself online through Aadhaar Self-service Update Portal. Follow the link – https://ssup.uidai.gov.in/ssup/ Make sure you upload a scanned copy of your original proof of identity.”  As mentioned in the tweet, one has to upload a scanned copy of the original proof of identity in order to avail this service. 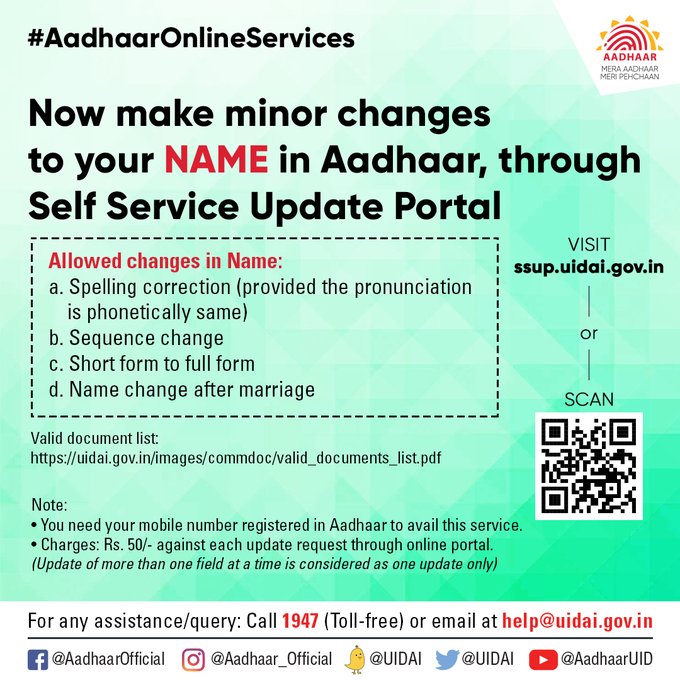 Through the self-service update portal, one will be able to update one’s name, date of birth, gender and address. For submitting the supporting documents, one will be required to upload original coloured scanned copies of POA document as per the valid document list.

For further information and query, one must visit the official website of UIDAI at uidai.gov.in.